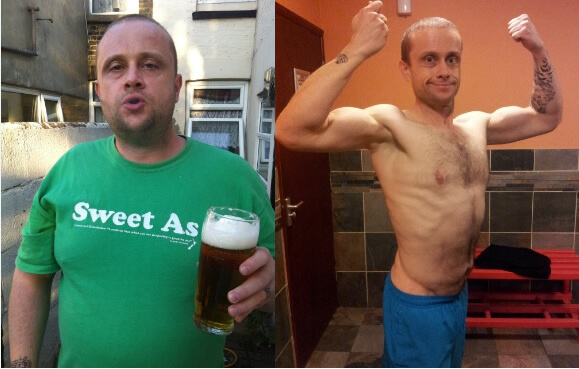 It was a seemingly normal day in December 2014. I even think the sun was shining. Yet, my life was about to change- forever. My journey into fitness and the I/F dieting technique had started. The significance of this date was that my brother had set a date for his wedding. I had 18 months. I was, to be frank, an obese mess and it dawned on me that to do him proud, and myself justice in the photographs, I had to get fit and lose weight. That’s when I approached TeamRaf and it was the single best decision I’ve ever made. I’d never set foot in a gym in my life and I was a total novice. I was 38 years old at the time. I’m an anxious and nervous person at the best of times so to say I was out of my comfort zone was an understatement. Raf put me at ease instantly and although, even now, my self-confidence is fragile it is so much stronger than ever before. I trained my mind alongside my body. Raf had to pretty much de-construct me and put me back together again piece by piece. In attitude as well as physically. From day one to the present Raf has alwayas made me feel welcome at training, at ease, and part of something that he himself believed in 100%. The training with TeamRaf started as purely cardio work to shift the weight. As the weeks and months passed the weight shifted and, working alongside my I/F dieting plan that Raf had set up, it quickly became apparent that I could push myself and my targets and boundries even further than I’d imagined. This is when we moved to the bodybuilding programs. I was now just over a year away from my initial target of the wedding and was way ahead of where I’d expected to be physically. Time to push harder! The weeks went by and I trained three times with Raf. Mondays were legs, Tuesdays were chest and arms and Thursdays became my back and shoulders day. I had become so empowered by what I was achieving that the target date of my brothers wedding had become secondary. I was smashing my goals and loving every minute in the process. My fitness ‘project’ had taken on a life of it’s own and the July 2016 date for the wedding came and went without much fanfare and left me seeking more, fitness wise. So, now, I’m hitting the gym harder and harder and seeing how far I can take myself in the bodybuilding world. I barely even recognise myself in the photos of two years ago and have to pinch myself from time to time. I love it. Fast forward to the present day, 2017, and I’m still training the three days with Raf but also training by myself for the two other week days and really enjoying every moment of it. I’ve never looked back since I started my journey and my confidence and self-belief have changed as much as my physique. For that I have Raf to thank. Although he’ll always tell you that the hard work is all your own, the team ethos in TeamRaf is paramount. Without TeamRaf I couldn’t of achieved what I have and what I’m still to achieve. I’ve loved every minute of being part of TeamRaf and will continue to love it. It’s changed my life and it will do so for you too.

Back to Our Transformations

Don't Wait For Change, be The Change!

Change Your Life - Join Us Now