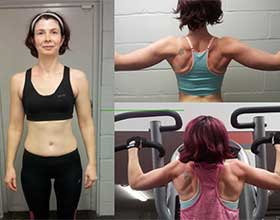 I started pt sessions with team Raf in March 2014. I had lost the weight I wanted to lose from having a baby 2 years before. I was looking to gain lean muscle mass & to take my fitness to a whole new level. My goal has always been to do a chin up, but I was never strong anuff to achieve it. With team Raf I trained hard & I achieved it doing my first chin up & team Raf filmed it. I was so proud of myself. Team Raf supported me with my diet. I found out I was under eating by 800 calories per day. I reduced sugar & was on a low carb diet & only eating carbs after training. Giving up bread was the hardness part but in 3 weeks I achieved my 6 pack. I never thalt I would get after having a baby. With team Raf he makes the impossible possible. It is very hard work but you see the transformation fast.

Back to Our Transformations

Don't Wait For Change, be The Change!

Change Your Life - Join Us Now